Due to my internet line problems, I was not able to up-load this report long-time. But please check.
There is some info about mighty gripper V3 here.

This Mighty gripper F1 class event separated from touring car class schedule, Because we estimate more player than last our mighty gripper cup which was running by F1 class together TC class same day on Sept. But unfortunately not that much players was.

Even so not much player than our last race event, It was nice and exciting to watched!  Because most serious F1 racers in manila were there and, This event was a debut event for our new Mighty griper V3 at that time. We finally saw the mighty gripper V3 spec by users running on this day! 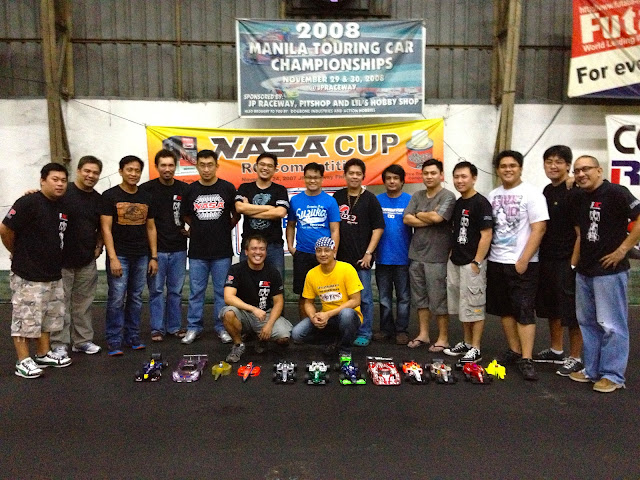 15 minutes open track best lap qualifying for every one,  2 times of only 3 laps of super lap style qualifying by one by one is same as last nasa cup. We took only one best lap from every player's best running.

By only Fastest Philippino F1class player, Expert F1 class TQ taken by American philippino "Leo". He did not betray expectations of all manila F1 players. He made a great job!  But.., even so He got TQ it wan't marking on 3laps of the super laps qualifying.  His TQ time marked by open track 15 minutes qualifying, it Because all manila F1 players were watching only his super laps during super laps. Then It became so much pressure on him according TQ "Leo" said. Please check his running video and his comments!
In 2nd position "Noel" was there. I just prepare one narrow F1 Tamiya F104Ver2 pro to join this class, then he took 2nd by his brand-new car without not enough his practice. 3rd slot was looking so tight, but finally "Ted flores" got this slot and he showed us his young powers.

TQ is Leo, And following by Noel with only version 2.
A new expert player in Mighty gripper cup "Ted" showed us his fastness already, He've got 3rd on it. Former tamiya asia cup F1 class 2nd winner "Joel" came back from long rest from competition and He've got 4th on it. Then last grid in Expert F1 class is Chito he used to be only off road player few month ago but he already can handle one of most difficult category F1 now, Great!

Taka: "Congratulation for your TQ Leo,
Can I have your comments?"

Leo: "Yes taka. Actually, It was just lucky for me TQ this time.

I tell you what,  My hands were shaking during super laps showtime.
I got nervous by all players attention, and your announcement made me nervous, too.
You are bad friend of mine Taka.  haha..
So That's why I was not able to marked better time on super laps show-time.
But I had very good fastest lap during 15 minutes open track,
Thats why I'm saying I was lucky."

Taka: "Was it so big and strong pressure for you, wasn't it? sorry sorry!"

Leo: "Yes it was! Then I'd say I like it! I have to train my mental toughness now."

Taka: "Okey! happy to hear that you liked it.
By the way, how was the Mighty gripper V3?"

Leo: "Yes. the new V3 gave a lot faster for my car
with lighter car driving feeling compare to V2."

Taka: "How big difference in between you lap time?"

Open F1 class was looking more Exciting. Every one has no experience to be top 3 in Manila F1 class race yet, and all former top 3 guys are not in there. Every one are aiming to be champion this time!
It really was hot!

The end of this very hot class qualifying, TQ was taken by "Allan" with his Lemans body-shell and his car was really fast.  2nd position was taken by "Stephen de leon".  He just came back RC on that day, and this was his first time F1 driving, but he've got it great position on it!  And I'd rather better to tell,  he was former champion in Mighty gripper silver can TC class 2011. His driving was looking very clever and fast. 3rd position was taken by "Edward Angtuaco". He used indy car body-shell and his car was fastest car on the straight during this race day. He always make very nice car even not F1 class.

Taka: Hi, Allan an old-time! You still was fastest!
But why you are with the Leman-car body-shell even so you have F1?

Allan: Yes Taka, My car was very stable compare to other F1 cars
because it has more heavy and more down force then F1 cars.
Thats why my car was driving easy then I got stable lap time today.

Taka: I think Lemans body has more advantage then F1 body is it correct?

Allan: We will see it later, taka. Because now race track has not much grip yet.
I don't know what will happen when the high grip time come on the race track.
I think my car is ok for now because track grip is not high yet.
But i really don't know how will be my car with high traction condition.

Allan: Yes taka.  I think, I can't go more faster then TQ time.
That was my car's peak time on this race. 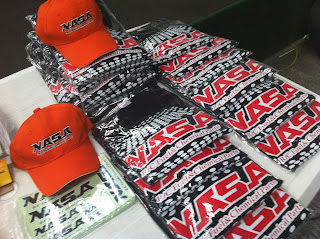 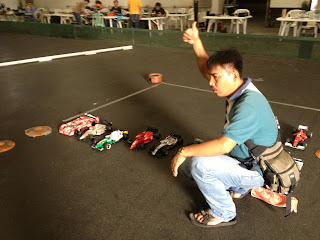 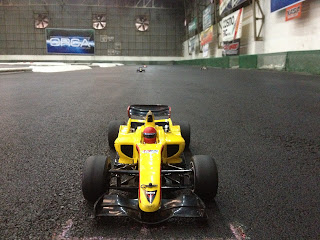 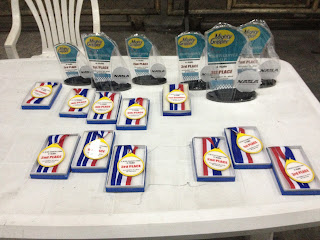 Race was swept by "Leo Virtusio". He made 2times of perfect running at first 2 hearts then confirmed his winning quickly. He likes better V3 than V2 when race track had high traction. but He used and it was better V2 during practice when track is not high grip yet. I think he is one of them Fastest F1 RC player even international race of non factory guy. And he is looking for more high level racing event not only in Philippines now.

2nd winner battle be came tie-break by "Noel" and "Joel". On the heat 3, I was so exiting to watched the battle of them and it was very nice looking. "Noel" was reading it, but "Joel" catch him at the end of the race. Actually I'm sure of this, They are the two who gave us most excitement on this mighty gripper F1 cup this time. It wasn't from winner "Leo".

New expert F1 player "Ted" and "Chito" was fast too. You may know how they also was nice if you watch my race video of H3. 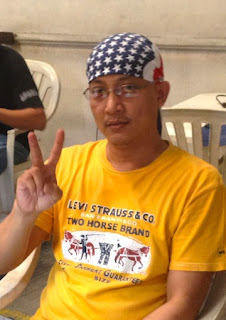 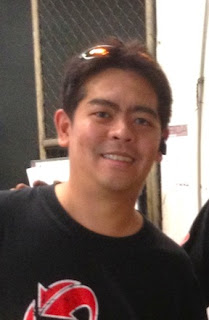 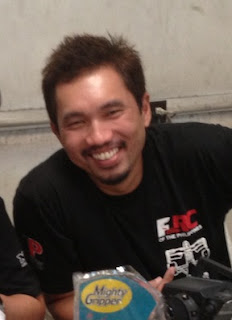 
Open F1 class, It was very hard to find who is reading each races also hard to report actually. Because there were always battle and accident everywhere.  But, players were so serious to be winner then finally one strong guy who strong in traffic race got champion of this tough class!  Old-time Allan was expecting his car to be slow during high-bite condition, because he is old-time.  Like he said, his car became not fastest car during race time. So, he lost! Now i knew it Why he was not so confident even so He has TQ.  Sorry for "Allan". Also now we know, F1 is faster then Lemans when track became high-bite with rubber tires.